For most, a home invasion is a nightmare scenario. Someone coming into your house uninvited can have deadly consequences, and a lot can happen in the minutes it takes the police to arrive. If you’re concerned about home defense, the best defense you can have is a firearm. Once someone gets into your home, the only sure way to stop them is with lethal force. If, however, you do not want the responsibility of owning a firearm, can’t legally own one, or aren’t prepared to kill someone, then a less lethal gun may be your only option. Even for the comfortable firearm owners out there, a less lethal option is a good idea. We can all agree that having to take someone's life can be emotionally, spiritually, financially, and legally costly, and is best avoided if possible. In addition, many situations don’t justify lethal force. Having a non-lethal option gives you the ability to stop a threat in more situations than a firearm alone.

Many less lethal options aren’t up to the task of home defense and are at best a deterrent. There are several things you want to look for in a home defense gun.

Power: Many less lethal pistols including the Byrna SD simply do not have the power to stop someone in their tracks. With the technology that currently exists, the most powerful less lethal guns are often larger ‘long guns’ modeled after shotguns or rifles. They can be less maneuverable in the dark hallways of your home but are powerful enough to stop a threat.

Reliability: It’s crucial to have a reliable device that functions perfectly when you need it. In a live situation, you’ll be nervous and your fine motor skills will go out the window. Having a device that is easy to manipulate and dependable is a necessity.

Deterrent Factor: Often, a deterrent is all that’s needed to stop an intruder. When presented with a large shotgun, most attackers will cut their losses and take off. The more ‘painful’ a weapon appears, the less likely an attacker will continue with his plans.

Engagement Distance: Being able to engage your attacker from a distance keeps you out of harm's way, and gives you time, a crucial factor in conflict situations. Pepper Spray is very effective, but most models only have an effective distance of a few feet. Pepper Projectiles will give you a standoff distance of up to 100 feet, giving you the extra space that can make all the difference.

Round Capacity: Any conflict is highly unpredictable. Anything can happen. The more shots you have, the better.

Storability: Since most non-lethal guns are powered by air, the storability and immediate usability of these options is an important consideration. If you store your air gun with a standard paintball air canister, it will leak overtime. The best options are guns that utilize sealed Co2 canisters that can be ‘quick pierced’ when needed. Most less lethal options have a ‘quick pierce’ ability that allows you to charge and fire your gun in a matter of seconds.

Here are the Top 10 Less Lethal guns for home defense:

The Umarex HDX 68 is the best option for less lethal home defense. It checks every box in the home defense category. It’s powerful at over 40 Joules of energy. It’s intimidating and an excellent deterrent and is highly reliable. It has an excellent magazine capacity, holding 16 round balls. The front of the gun includes a big metal muzzle device that can be used to strike an assailant in close quarters. The HDX68 also comes standard with a quick piercing magazine that allows you to store it indefinitely and have it available when needed. The orange motif ensures that when the police show up, they won’t mistake you for the bad guy. 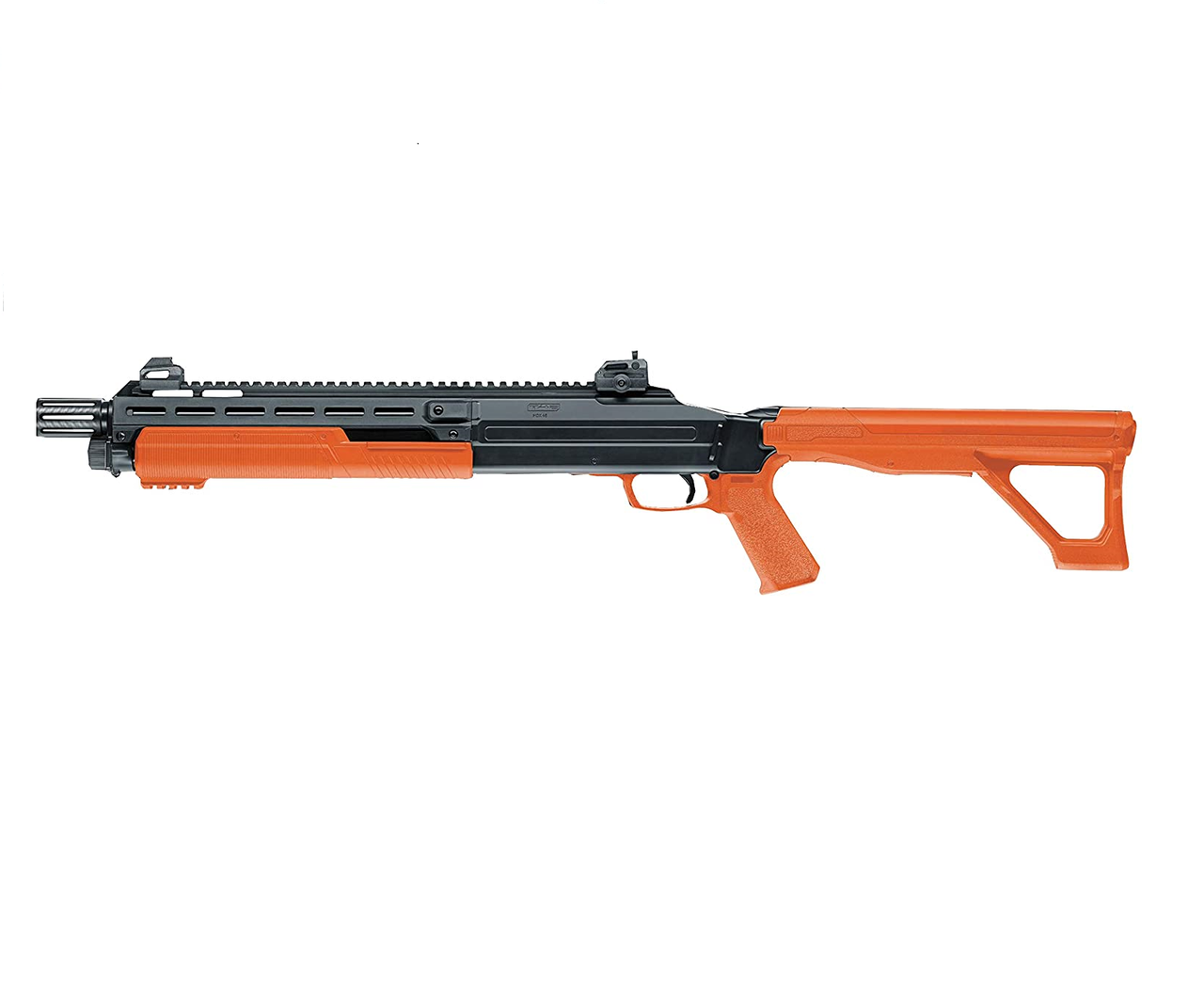 The 16 Joule version has the exact same features as the above 40 Joule version, but is slightly lower powered, comes in all black and has a lower price point.

The Byrna Mission 4 is a high-quality AR-15 style rifle that is best suited to gun owners that are already familiar with the AR style platform. It’s powerful, fully customizable and comes with two 19 round magazines and a quick piercing sealed CO2 canister. The Mission 4 comes in at a high price point, costing as much as a firearm, but the reliability and build quality will be worth it. 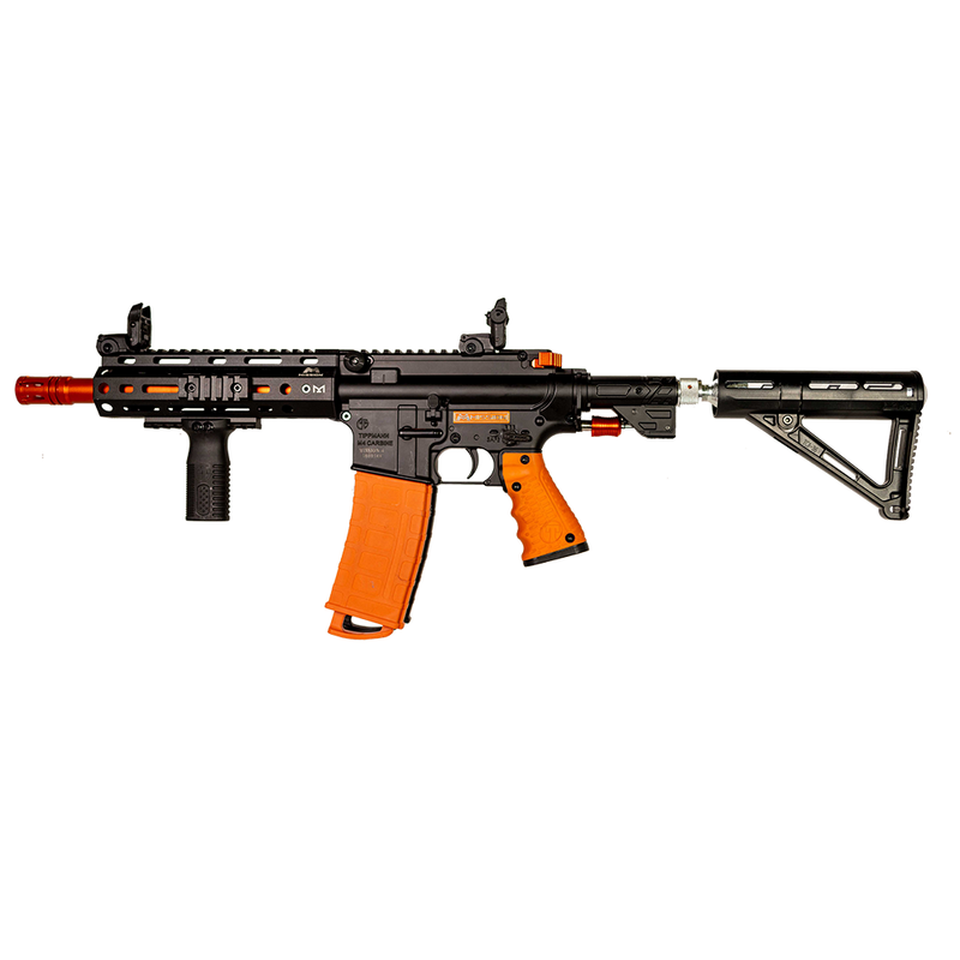 The Taser is a classic self-defense weapon. The Taser Pulse provides complete neurological override of an attacker for 30 seconds, allowing you to get out of the house. The shooting distance is up to 15 feet. The only downside to the Taser is it’s one shot. However, many criminals are familiar with the effectiveness of the taser and don’t want to “ride the lightning”, and hopefully you’ll only need to display it. 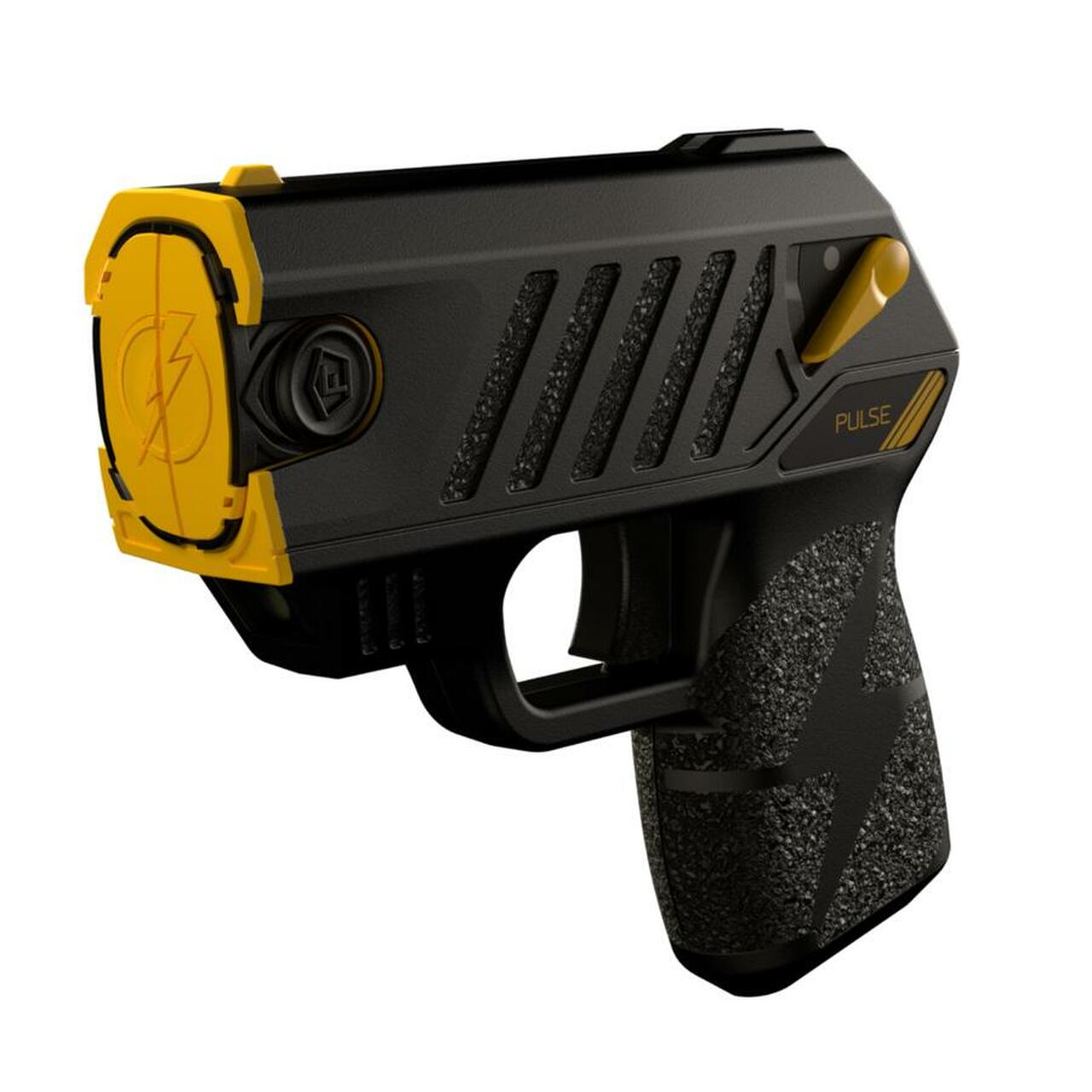 The HDR .68 is the most recommended air powered non-lethal pistol on this list. It is powerful, has a ‘quick pierce’ ability, is easy to use and is maneuverable in a home environment. It can be loaded with a variety of .68 caliber ammunition, including pepper rounds. The one downside of this option is the magazine only holds 5 rounds, but it is quick and easy to change. 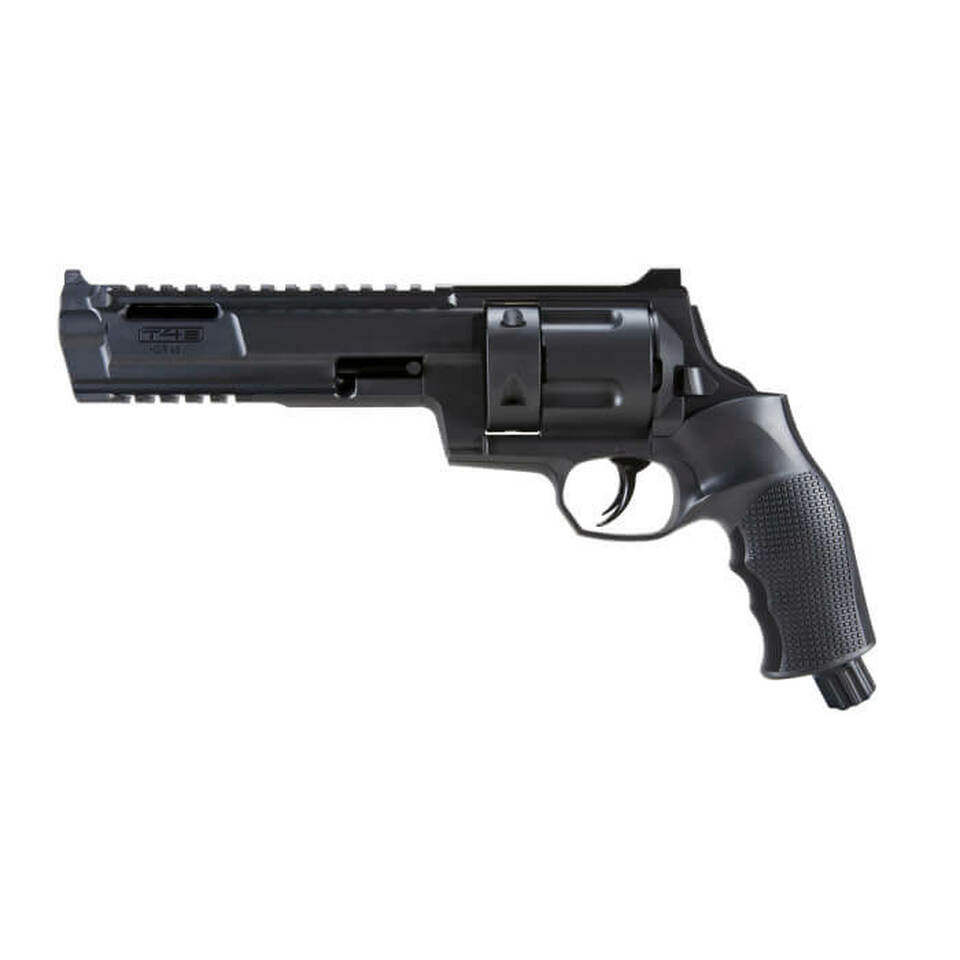 The Umarex HDR .50 is the little brother of the HDR .68. The rounds are slightly smaller, but the gun has upgrade kits that give it an incredible amount of power. It has the same features as it’s bigger brother with standard ‘quick pierce’ ability, ease of use and maneuverability in a home environment. 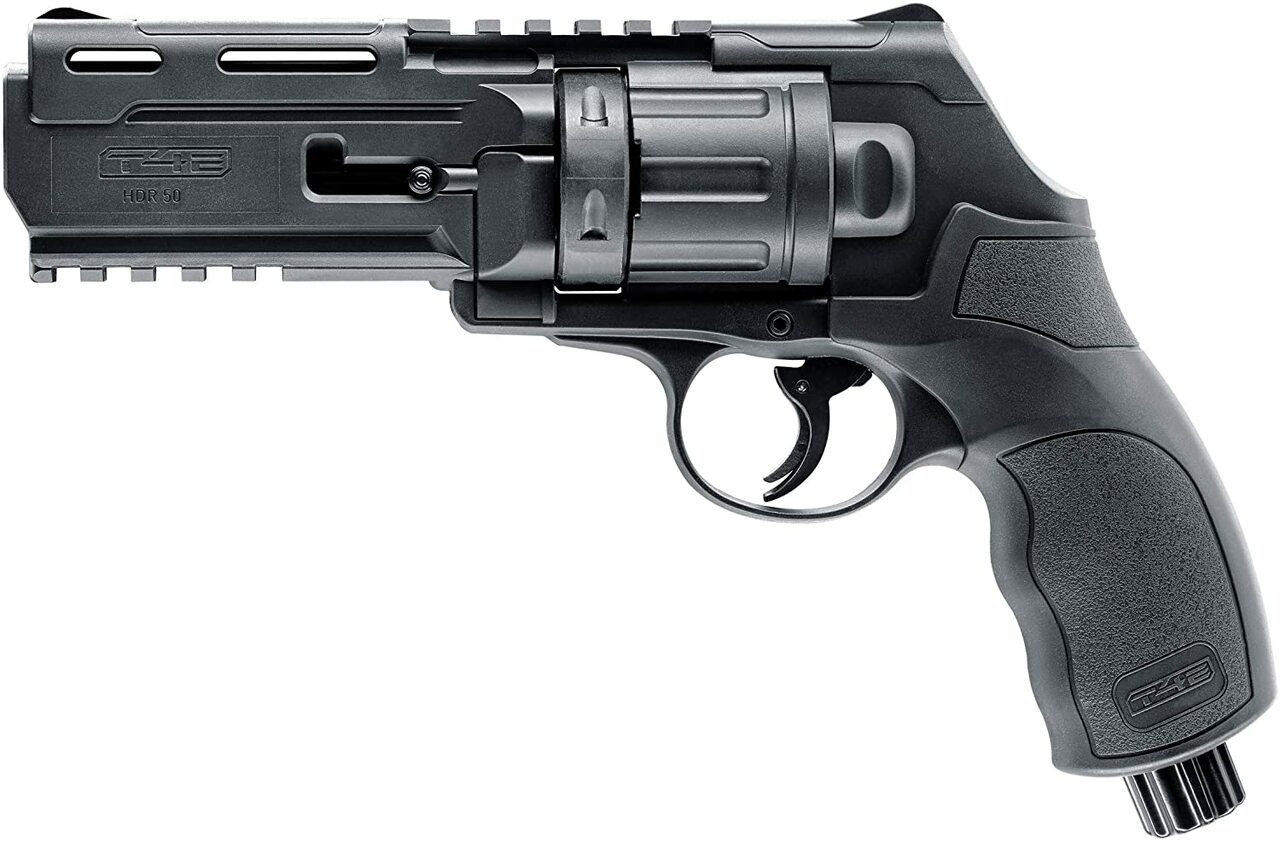 The PepperBall TCP has been on the market longer than most of these options. It’s a time-tested classic. It’s powerful and holds six rounds, but unfortunately does not have a quick pierce ability. To activate it, you have to screw a lever until the cartridge is pierced. It’s also a little bulky for a pistol, which isn’t as important for home defense purposes. 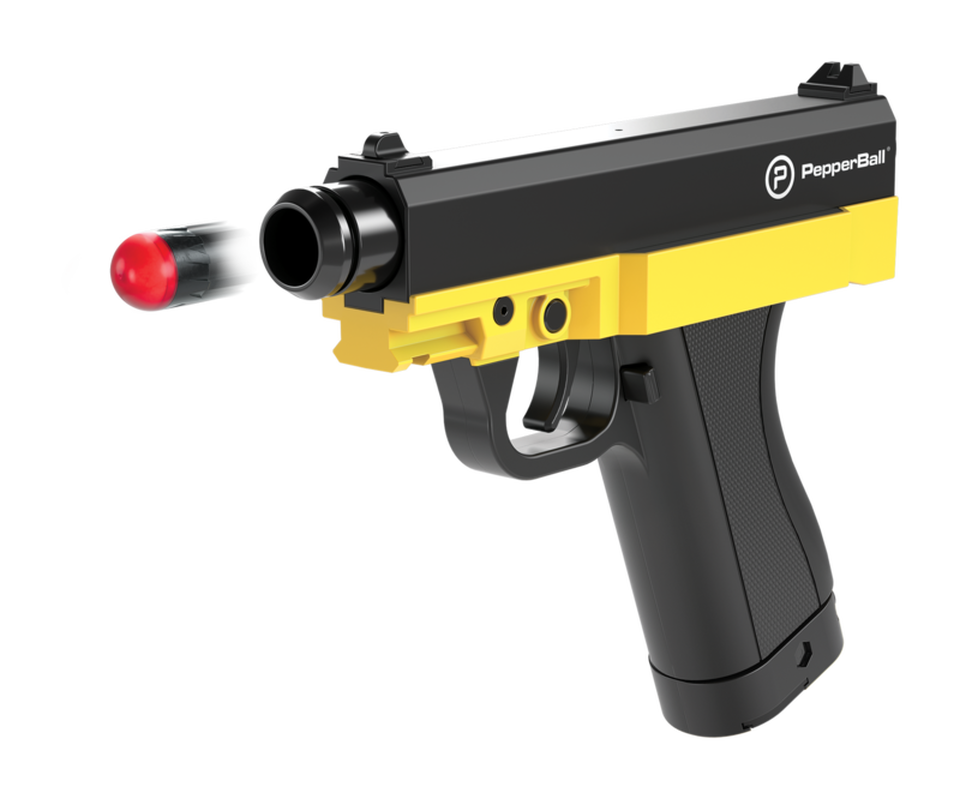 The Byrna SD is becoming extremely popular but is mostly for concealed carry outside of the home. Its biggest advantage is its compact size making it very concealable. However, most people report its power coming in at only 2/3rds the power of the PepperBall TCP. The magazine comes with 6 rounds but can be quickly changed for more shots. 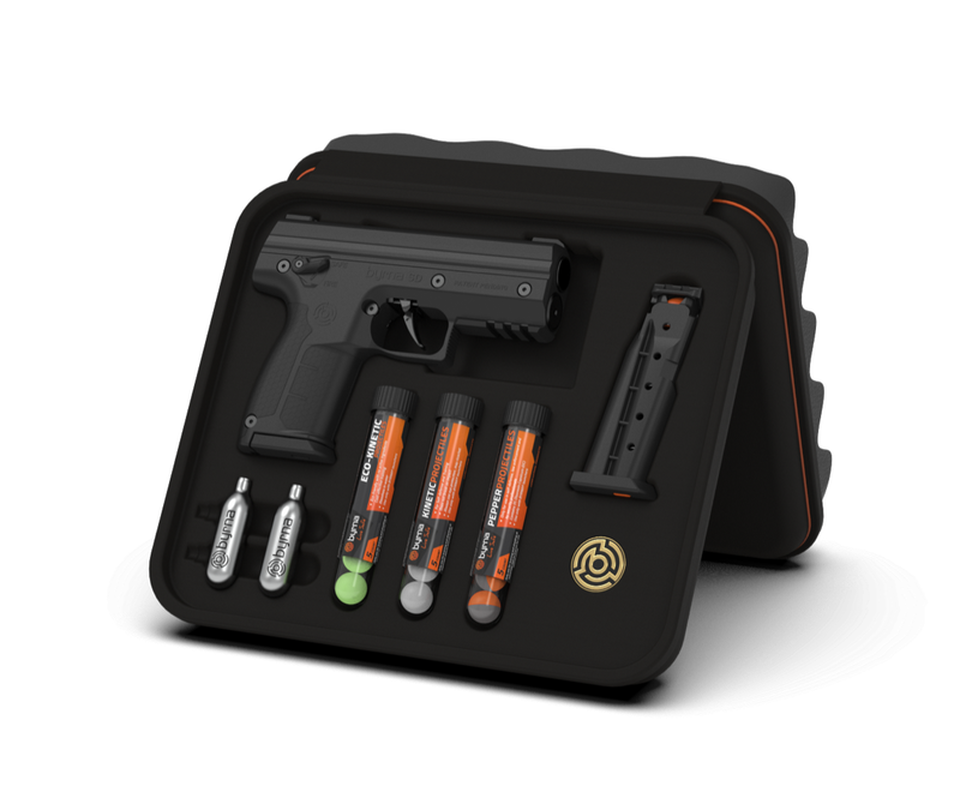 The HDS is a double barrel shotgun design that holds two rounds, including round balls and shaped projectiles. The low capacity is its biggest downside, but it’s cheap and can be modified for higher power. It’s also very simple to use and a solid deterrent due to its intimidating looks.

The Taser 7 CQ is the Rolls Royce of Tasers. It has the same ability as other tasers to completely override the neurological system of an attacker using electricity. However, taser has redesigned the device to be more accurate. More reliable and better suited for home defense. It also comes with two shots, instead of one. It is however very expensive, but if you want the power of a Taser, and are willing to spend for high quality, then this model won't disappoint.